A Brief History of our Parish

In 1928 a new church (to seat 380 people) was built on the John Street Site where the high block building (now part of the Council’s Community Centre) stands today.  That church was badly damaged by cyclone David in 1976. Masses were then held in the old Parish Centre (opposite) until a new church (which is now the Council Library) was built in 1978 to seat 400 people.

During the period immediately prior to the building of the new church meetings were held that decided that the old church and school site were too small and that the Parish Complex would have to be moved to a larger site in the not too distant future.

In 1985 the then Bishop Fr. Bernard Wallace appointed a committee to look into catholic education on the Coast. The two Order Owned Boarding schools pulled out of that committee due to the fact that they did not want co-education. The committee's findings were that John Street site was far too small and that the Parish Complex should be moved. This was resolved at a committee meeting 21/7/86. There were three  possible sites available, Farnborough Road , Caroline Street and Lammermoor.

A public meeting was held 21st November 1987. 36 people attended that meeting and 29 voted in favour of moving the parish complex to the new site at Lammermoor. 1 person abstained from voting.

In 1988 the first application was made for a grant to re-site the school, this was not approved. the application was resubmitted in 1989 and approved. The new school was opened in 1991. At that time the Then Bishop wanted the whole complex to be moved at once. Our then Parish Priest, Father Milner was against this and requested that the church remain at the John Street site until the new school move had settled down.

The new church on Tabor Drive was built during 1995 and was officially opened and blessed by our then Bishop, Father Brian Heenan on Sunday 6th August 1995. 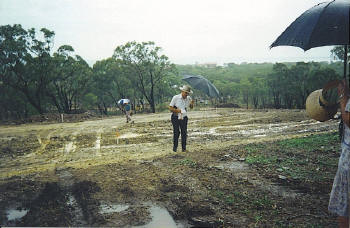 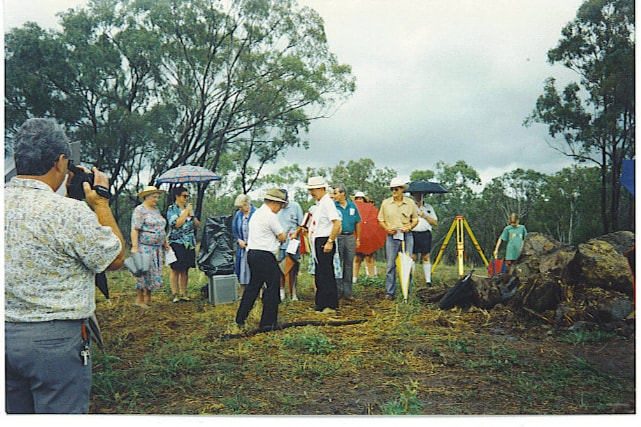 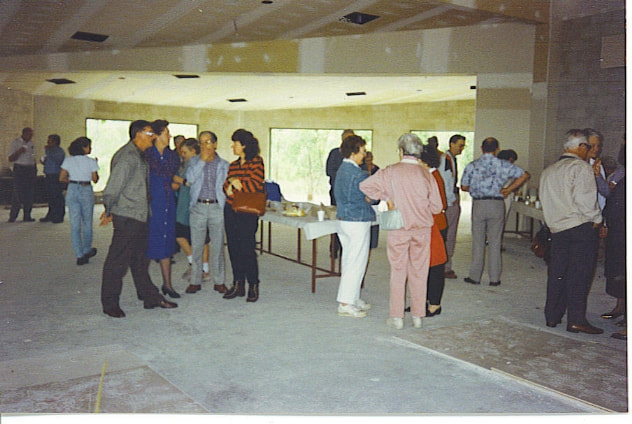 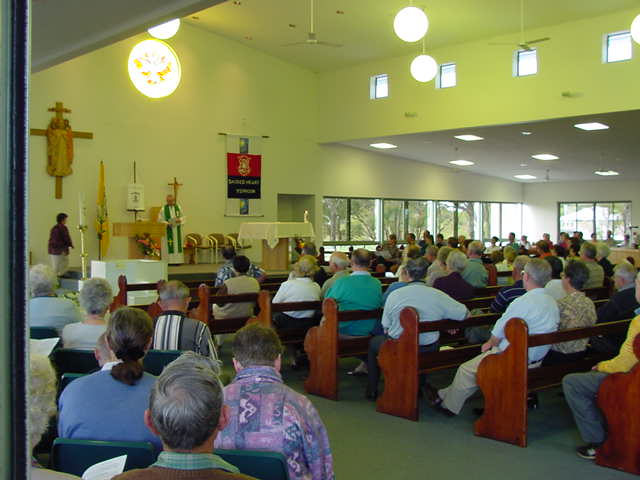 1904
The Church was given the name 'Mary Immaculate' and was blessed and opened on September 25th, 1904 by Right Rev. Bishop Doyle of Lismore N.S.W. He was assisted by the Right Rev. Bishop Higgins, the Rev. Fr Ryan, Fr. Battle and Rev. Fr. Shiel. There was a large gathering of people from Rockhampton and Mount Morgan that attended the opening service. The previous evening about 100 people arrived at Emu Park on the train and that morning a number considerably more than that arrived on a special train from Rockhampton. The Church bell was donated by Mr. Little and the organ was donated by Mrs. Adelaide Morris, wife of James Morris. This organ is currently in the Emu Park Museum .

1923
By 1923 the population of Emu Park was growing rapidly and Masses at the Church were becoming over-crowded, particularly during holiday periods. This necessitated the enlargement of the Church.

Bishop Shiel arranged for the addition of two wings on the Church as well as a new sacristy. This brought the shape of the Church into the form of a cross. To make room for the extensions, the existing sacristy had to be moved back.
Peter Anderson carried out this work and the renovations were blessed on 23rd December 1923 by Dr. Shiel with Fr. Bray (the parish Priest of North Rockhampton ) celebrant.

1928
In 1926 the Reverend Dr. Sheil, (who was currently the Bishop of Rockhampton), decided to build a Church at Yeppoon. He appointed the Reverend Father Bannon of North Rockhampton as Yeppoon's first Parish Priest.
The Yeppoon Catholic Church was blessed and opened by the Reverend Dr. Sheil in 1928. After the Church was built at Yeppoon, Father Bannon placed the whole area, including Cawarral, Mount Chalmers , Tanby and Emu Park , under the control of this new parish which was called 'Sacred Heart Parish’ later changed to ‘Capricorn Coast Catholic Parish’.

1974
By 1974 when Father Johnson was the parish Priest the original Church had fallen into disrepair. Concerned with the safety of parishioners who worshiped there, Father Johnson declared the building unsafe and decided to demolish the building. After over 70 years of serving the Emu Park Catholic community the Church was demolished.

After the original Church was declared unsafe a new place of worship was required. St. Agnes School which stood next door to the original Church had been closed in 1965 and Dr Johnson had decided to convert this building into a Church.
​
Herman Hock, a local parishioner, was contracted to convert the old School into a new Church. According to Herman, the conversion took "two to three months" and Herman essentially did all the renovations himself.
The new Church was opened and blessed 26th May 1974 by the Most Rev Bishop B. Wallace. He was assisted by Fr. Johnson, Fr. Hayes, Fr. Cawte and Fr. Benjamin. Parishioners from Emu Park , Yeppoon and Rockhampton attended the opening as well as Sisters from St Ursula's and the Range Convent. Also present was the Queensland Provincial of the Christian Brothers, Br. R. Mickey and the rector of St. Brendan's College , Br. P. S Wright. A supper was hosted in the Churchyard after the ceremony to offer those attending the event an opportunity to meet with Bishop Wallace. Kevin Black, (a local parishioner at that) time planted a number of trees out the front of the Church however these would be removed years later.
This building would serve for a number of years although it struggled to accommodate the crowds during holiday periods. Christmas periods in particular saw the Church over packed. However, the community of Emu Park always sought to welcome their visitors.

1984
It was soon realized that the Church, formerly St Agnes School, would not accommodate the number of people attending Mass. This was especially true in holiday periods, and particularly during the Christmas seasons.
Fr. Benjamin assisted by Fr. Moran and later Fr. Karl Duivenvoorden set about raising funds for the construction of a new Church. There was a 'Buy A Rockblock' campaign where a $2 donation would pay for a rock block in the new Church.
The new Church was built close to the same ground as the original Church that was built in 1904. Tony Ryan was the architect and John M. Kelly was contracted to construct the new place of worship. Tony Cooper, a parishioner of Emu Park was the foreman who oversaw the construction.
Mary Immaculate Church was blessed and opened on Dec 8th 1984. Bishop Ray Benjamin, who was now the Bishop of Townsville, officiated at the ceremony. Emu Park was very grateful to Bishop Bernard Wallace for all his help and encouragement as well as his gesture in inviting back Bishop Benjamin to his old parish to officiate.
Along with Bishop Benjamin, past and present Priests of the time also attended the opening These included, Fathers Tom Martin, John F. Moran, Karel Duivenvorden, William A. Smith and John Rasmussen. Father Mick Hayes also assisted at the opening.
​
2004
On the 25th November 2004 the Mary Immaculate Church community celebrated the centenary. 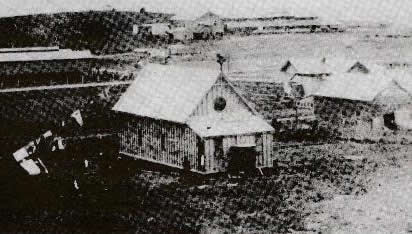 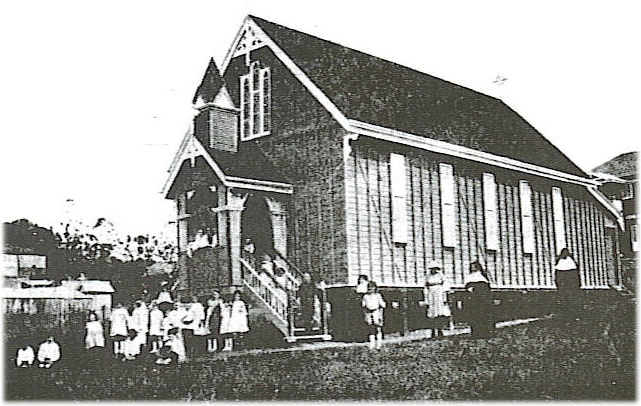 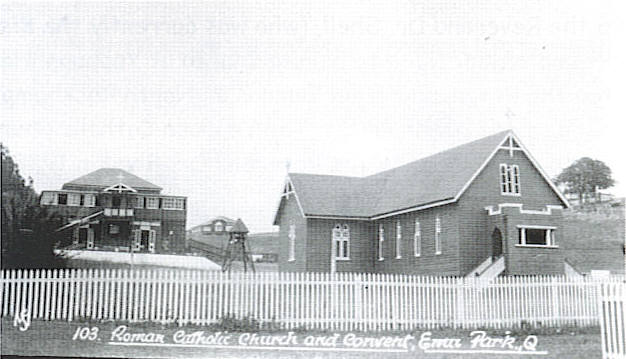 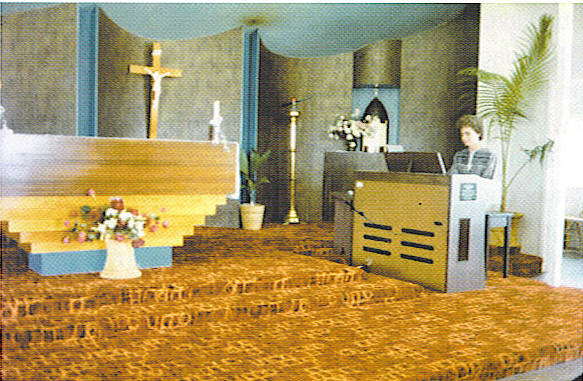 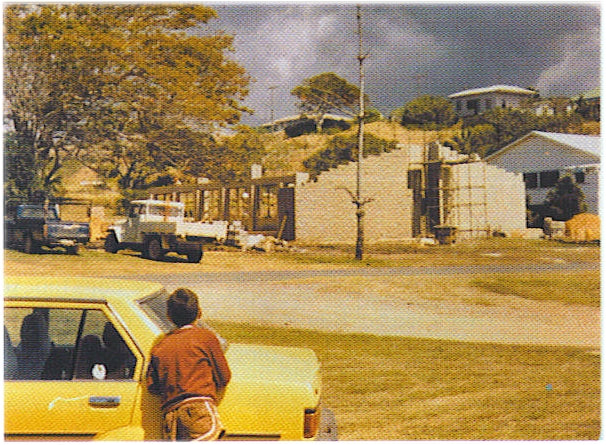 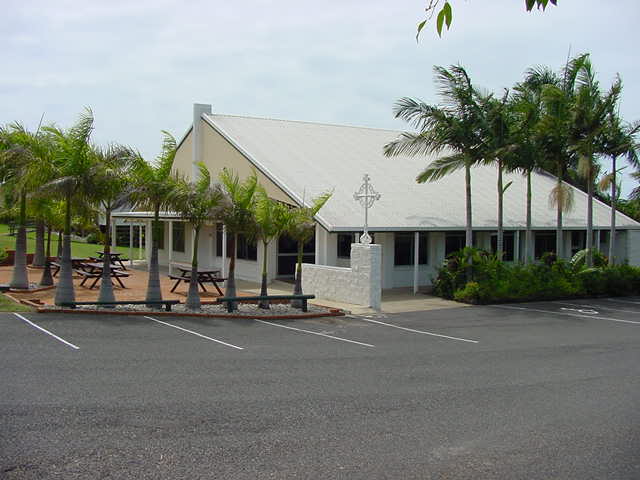 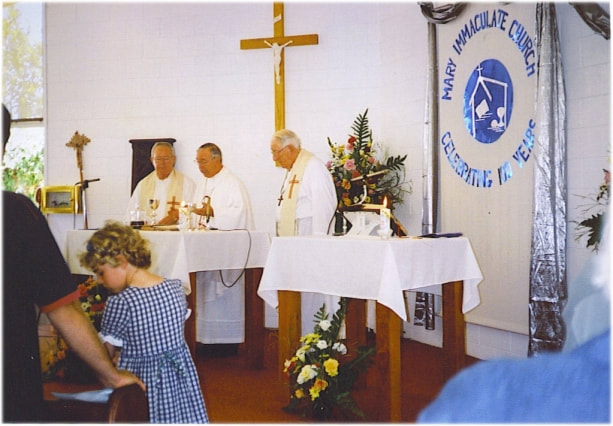 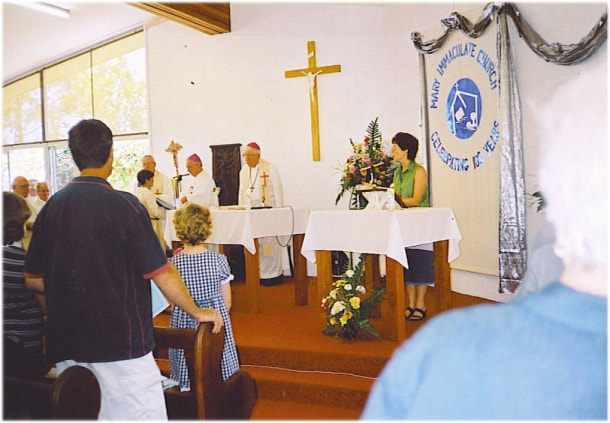 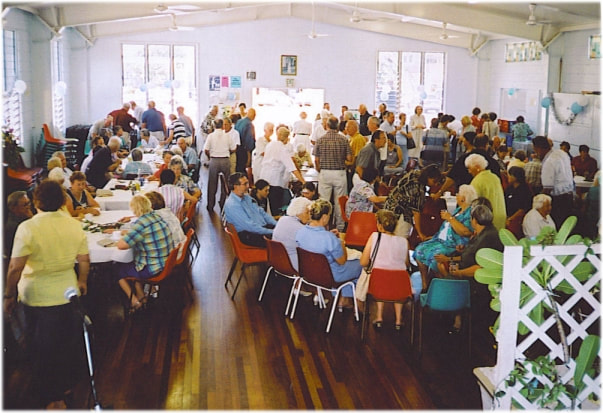 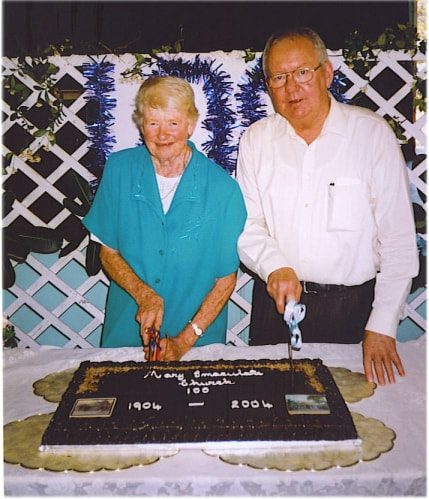